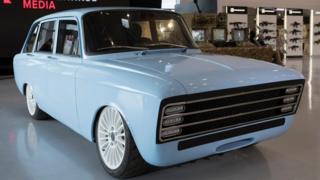 Russian manufacturing firm Kalashnikov has wheeled out a retro-looking electric car it says will give Elon Musk's Tesla a run for its money.

The firm behind the famous AK-47 assault rifle presented the eggshell-blue prototype vehicle, the CV-1, at an event near the capital, Moscow.

It said the CV-1, inspired by a Soviet hatchback created in the 1970s, was a revolutionary cutting-edge "supercar".

The company said in a statement on Thursday that the CV-1 car featured a number of "complex systems" with technology that would "let us stand in the ranks of global electric car producers such as Tesla".

It added that, when fully developed, the car would have a top speed several times higher than current electric vehicles produced by its firm and would be able to travel 220 miles (350 km) on a single charge.
«1234567…14»